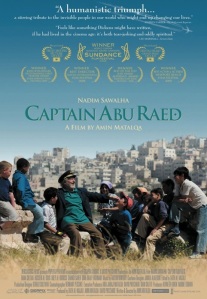 “When I was a boy … I had dreams”  are Captain Abu Raed’s first words to the group of hopeful children surrounding him on the hill top in Jordan.  The dusty dry soccer area circled by Roman columns and the airport become the settings in the award winning film, Captain Abu Raed.  The older widower and several children from the village learn life’s joy and lessons.  It is a tale of truth, dreams, compassion, forgiveness, courage and sacrifice.

The children fascinated by this reluctant widower insist on creating a space for friendship. Never having been on an airplane himself, he reluctantly allows the children to believe he is a pilot.  What to say to the children becomes the story.  With the claim of more than 2,000 books in his library, though living on a modest income in a modest neighborhood, Captain Abu Raed enthralls the students with tales of the world from stories he has read.

On the bus between the village and his janitorial job at the airport, Abu Raed reads Season of Migration to the North by Tayeb Salih and Denys Johnson-Davis.  A classic story from the African perspective of a journey away from family, stability and values to the decadence and corruption of the North (Europe).

This is an ironic touch added by the writer Armin Matalqa, who was born in Jordan and immigrated to the US when he was 13.  Captain Abu Raed is Armin’s first feature film.  In addition, this is the first feature film produced in Jordan in 50 years, is the winner of 27 international film awards and submitted to the 2009 Oscars.  Now, the film is being shown in theaters in major cities across the United States.

Books offer an escape to another part of the world, a chance to dream and ultimately books can leave an emotional print on the human spirit.  So to does a timeless classic film.