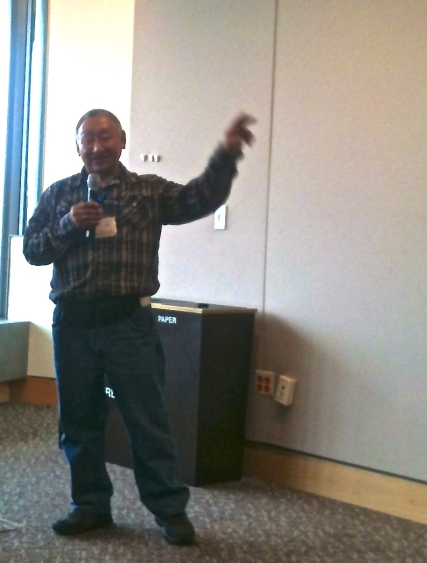 Mattiusi Iyaituk, a gentle small figure steps forward to share a story of a life evaporating as quickly as the snow melts to make way for spring. Climate change, travelers, technology, forced faith conversions, and ultimately, forced migration are slowly eradicating a culture that peaceful survived the harshest of conditions while retaining the most precious of human experiences, the family, faith and storytelling. His story , too, is a tragic bellwether of the impact of climate change.

With open hands emphasizing key points in his life, Iyaituk slowly weaves the tale of his life born a nomad, working as a policeman and then becoming an artist and advocate for younger artists. As he speaks, he naturally poses as if he were an animated serpentine dancing polar bear sculpture.

His speaks of the elders and the changing landscape. The elders passed down knowledge from generation to generation. They shared how to create hunting tools from the hardest of natural materials. They also taught how to navigate a landscape with no apparent landmarks exclusively through the stars where making one mistake is death for one or all in the group. He explains now they use GPS because after the Asian earthquake the axis of the earth shifted and the stars are no longer aligned with what they had learned. The land is changing, too. Growing up there was six feet of ice and now only two feet of ice. He quietly references the tradition of Shaman spirituality, which incorporates the full scope of presence – respecting the connection between the individual, family, nature and the spirit world. Ingrained in all actions, is the absolute belief in community, following the lead of the elders and always turning around to teach the younger ones.

With a thick voice, Iyaituk shares his earliest memory of being so close to death. Living in a snow house, he and his mother waited for his father to return from hunting. Alone, surrounded by wild animals just as hungry as they were, they waited. Until, a noise from outside broke through the silence. His mother called out, hoping for a response that would be from her husband and not a polar bear. Hearing her husband’s call, she moved the “snow door” to let him in. “When opened, my father was trying to get in. So weak, he couldn’t come in. My mother took his parka hood and dragged him in.” The whole family was weak from hunger, near starvation. His mother sliced her skin boot, burnt the hair off and fed the family the leather.

Life’s experiences do shape the storyteller, the artist. Picking up a stone chip when he was 14 years old, Iyaituk began. Letting the stone tell the story, the Shaman spirits and the enduring legacy of the Inuit culture. His pieces are abstract in nature and have been shown around the world. With experience already of creating 3D items for survival, Iyaituk now uses snowmobiles to collect materials and power tools to shape and mould the hardest rocks into enduring stories themselves. He sold his first piece, a raven’s head, for $2.00 some 49 years ago. Now one of his sculptures is selling for thousands of dollars and as Iyaituk says, “purchased by wealthy collectors”.

The Inuit artist, has no safety net of other economic opportunities to complement the income gained through art sales. Contrary to the South (as anything south of the Inuit territory is called) artists often are supported through an employed spouse, a second job and grants. The Inuit artist has no second economy to support the creative process. The Inuit artist creates to survive and provide for his family.

Being a successful artist, Iyituk has dedicated a good portion of his career supporting other artists through the Inuit Art Foundation and now is hoping to open a studio to support younger artists with hard to obtain materials due to the changing environmental landscape and the expenses of gas and a snowmobile to search and retrieve material.

When viewing an Inuit art piece in a gallery or museum, know that the title and short description of an Inuit art piece is just a small entry point of understanding. When Iyaituk visited the Ottowa Museum of Inuit Art and saw in the basement a kayak made of skins and a paddle, he cried. The paddle was made by his father when he was ten years old and memories of his family brought tears upon tears.

As much as the South has done everything possible to erradicate the culture of the North, perhaps one of the lasting legacies of the Inuit artists will be to actually help the South. The Inuit artists tell the tales of survival against threats by nature and man. Always reminding people to appreciate and protect the family, treat others well, respect other faiths and most certainly respect nature.

As Iyaituk said, “We always have each other, we live in a very harsh climate.”