Divers recovering a hoard of 3000 bronze Carthaginian coins with the head of a fertility goddess on one side and a horse’s head on the other
264–241 BC
Found in the sea o the coast of Pantelleria island in 2011
© Soprintendenza per i Beni culturali e ambientali del Mare, Palermo

STORMS, WARS AND SHIPWRECKS tells the story of the island at the crossroads of the Mediterranean through the discoveries made by underwater archaeologists. For 2500 years, Sicily was the place where the great ancient civilizations met and fought. Its rich and varied island culture has been marked by the Phoenicians, Greeks and Romans, Byzantines, Arabs and Normans. This major summer exhibition explores the roots of this multicultural heritage with over 200 beautiful and unusual objects rescued from the bottom of the sea. From bronze battering rams once mounted on the prows of Roman warships to the marble pieces of a Byzantine ‘flat-pack’ church: from intrepid prehistoric traders to the enlightened rule of the Norman kings, the exhibition illuminates the movement of peoples, good and ideas.

For the Arab geographer, Muhammad Al-Idrisi, resident of the court of the Norman King Roger II of Sicily, the island was  “the pearl of this century…Since old times, travelers from the most far away country…boast of its merits, praise its territory, rave about its extraordinary beauty, and highlight its strengths”. They do so precisely because Sicily “brings together the best aspects from every other country.”  (Al Nuzhat al-mushtāq fi’khtirāq al-āfāq or the Tabula Rogeriana -‘The Book of Roger’ 1138 – 54 CE.)

Over the course of the last 3 months, Oxford’s Ashmolean Museum of Art and Archaeology has nurtured Idrisi’s words with its extraordinary, STORMS, WARS AND SHIPWRECKS: Treasures from the Sicilian Seas. Currated by Dr. Paul Roberts, Keeper of the Department of Antiquities, and Dr. Alexandra Sofroniew, the exhibition promises to be one of the highlights of 2016.

Indeed there has been quite a buzz about Sicily of recent. Both the Ashmolean and the British Museum have showcased contemporaneous exhibitions this past year. And in both cases each institution has stressed the breadth of 2000 years of influence this island has received and fostered through its interactions with the Phoenicians, Greeks, Carthaginians, Arabs, Normans and other occupying forces. However unlike the British Museum’s Sicily Culture and Conquest, all bar one of the Ashmolean’s display objects were recovered from the seabed. While some of the objects are chance finds retrieved by local fishermen, most of the items were recovered directly from shipwrecks and excavated by archaeological divers. 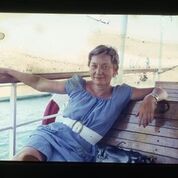 Fittingly the exhibition pays homage to Honor Frost (1917-2010), one of the pioneers of underwater archaeology, with an introductory installation of Frost and her equipment. Long before the advent of SCUBA, Frost applied the rigorous demands of (land) archaeology to the sea. By adapting existent methodology to that of maritime sites, Frost paved the way for systematic investigation that came to fruition in the 1960s and later in 1971 when Frost directed the excavation (and recovery) of a Carthaginian ship off the Sicilian coast.

Italy too had its innovators. In the 1950s Cecè Paladino and Francesco Alliata, producers of the first underwater films, also helped to promote the growing fascination with the sea. Concurrently, the archaeologist Luigi Bernabò Brea (and later Madelaine Cavalier and Vincenzo Tusa) would explore the early history of the Aeolian Islands and the Sicilian mainland at large.

Today Sicily is a leading center for underwater archaeology. Situated in the confluence of major historic maritime routes, twelve itineraries of which have since been realized, the island’s seas are governed by the Soprintendenza del Mare:  a body created in 2004 from the Dipartimento regionale dei Beni culturali e dell’Identità siciliana (Regional Department for Cultural Heritage and Sicilian Identity). The Soprintendenza del Mare is dedicated to research and preservation of the sea (as endorsed in the International Convention for the Protection of Underwater Cultural Heritage and adopted by UNESCO in Paris, 2001).

As the exhibition reveals with artefacts from shipwreck sites at Gela, Capistello, Sciacca, Levanzo, Camarina and Scauri, the sea and its bed can be both a destructive force and preservative agent.  In the initial gallery we find molars from the extinct dwarf elephant Palaeoloxodon mnaidriensis (circa 145000 BCE) as well as ancient anchors and the encrusted cargo from the Panarea shipwreck – evidence of trade relations between Greek colonies of Southern Italy shortly after the arrival of the Greeks in 734 BCE. 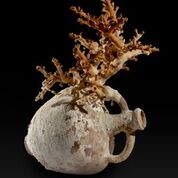 Amphora with coral. Lent by Soprintendenza per I Beni culturali e ambientali del Mare, Palermo to Univeristy of Oxford

Five centuries later it is the Carthaginians, not the Greeks, who capture our attention. Carthage rules the Mediterranean. As the Levanzo shipwreck off the north eastern Egadi Islands illustrates, Carthage also dispatches essential supplies to its General Hamilcar Barca (275-228 BCE). But come the 10 March 241 BCE history takes a very different course. Hamilar does not receive his goods. Carthage loses many more ships and is ultimately defeated by Rome. The First Punic War is brought to an end and Sicily cedes to Rome and remain under its tutelage for the best part of eight centuries.

In this second gallery, which is dedicated primarily to the Levanzo shipwreck, the visitor is treated to a simulation of one of the most decisive naval battles in history: 10 March 241 CE Carthage versus Rome off the Egadi Islands as recreated by SEGA (“Total War: Rome II”). The gaming technology does not betray. On the contrary, it is very much based upon primary literary and archaeological material, some of which is also on view. The debris from the shipwreck discloses the exact location of the encounter while the eleven rams, mounted on the front of the warships, illustrate just how Rome became master of the Mediterranean.

From a giant bronze elephant’s foot, a sea-bound altar to the god Poseidon to over-sized and aptly-named “grotesque” Roman sculptures, it would ordinarily be difficult to state which objects stand out the most were it not for the  much-publicized ‘flat-pack’ Byzantine church of the Marzamemi Maritime Heritage Project. Discovered in the 1960s by the German archaeologist Gerhard Kapitan, the Marzamemi wreck yielded hundreds of pre-fabricated marble elements of a would-be basilica – capitals, bases, choir screen, and remnants of the ambo or pulpit – which are currently exhibited. 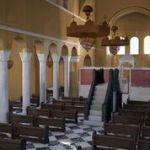 The Marzamemi church was one of many decreed by the Byzantine Emperor Justinian (c. 482-565) in order to centralise Christianity throughout his empire. Naves lapidariae, precarious stone-carrying ships, were dispatched from the Sea of Marmara (‘the marble sea’) to locations in Italy and North Africa. Upon arrival local stonemasons would re-fashion the objects and assemble them according to the intended design.

In this instance Justinian’s determination did not come to pass and the building-blocks of his faith lay on the seafloor for well over a millennium.  But what a sight it is now to behold.

Storms, Wars and Shipwrecks offers the visitor a unique opportunity to delve into the distant past and glimpse vestiges of Sicily’s rich past.  It really shouldn’t be missed.

By Adam Blitz, a Fellow of the Royal Anthropological Institute, London and a former Fulbright scholar. He writes on cultural heritage and its demise. He is a member of PEN International. On Twitter @blitz_adam   adam.blitz@columnist.com

The exhibition is organized in collaboration with:

And the COBRA Museum Consortium:

The Ashmolean Museum, University of Oxford

The author would like to thank  Dr. Paul Roberts, Dr. Alexandra Sofroniew, Ms. Claire Parris and the Press Office at the Ashmolean Museum.