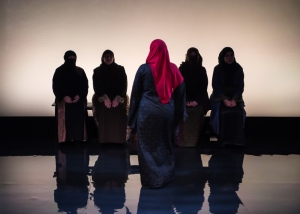 At the time of writing there are more than 2.9 million Syrians in exile in Turkey, Lebanon, Jordan, Egypt and Iraq. Over a million Syrians are registered as refugees since the dire escalation of the Syrian conflict in 2013. Three quarters of these refugees are women and children. The overwhelming majority is dependent upon aid.

In 2016 Developing Artists, a registered charity dedicated to supporting the arts in post-conflict and war-torn nations, worked with Refugee Productions to re-launch the latter’s 2013 Amman production, Syria: The Trojan Women.  Now re-titled, Queens of Syria, the production continues to address the plight of refugees and the Syrian Civil War. It does so through the lens of the Greek tragedian Euripides and his play of 415 BCE, The Trojan Women. Here thirteen women narrate the story of their own exile and experiences of war as the production weaves between the ancient Greek text and modern-day testimonies to great effect.

For Fatima, one of the original participants, the opportunity to appear on stage gave her, “a sense of responsibility” and enduring strength as Hecuba, the central protagonist of the original Greek play, was

“so close to me…we were all queens in our own houses.”

The Project is both an agent of advocacy as well as therapeutic in design. The narrative powers of drama raise deep questions for the survivors of trauma. For Developing Artists this opportunity builds self-confidence at the same time as it enables the participants’ a creative expression long denied. None of the women had ever set foot on a stage before — let alone engaged with a global platform. The consequences are still felt. Several women, out of concern for their families, have chosen not to disclose the family names are appear purely as Mais, Rahme or Sham.

Euripides Trojan Women was his third tragedy to deal with the Trojan War. All of the plays were based on the lost Trojan Cycle epic however it is Homer who serves as the backdrop. The familiar figures of Hecuba, her daughter Cassandra, Andromache and Helen, the non-Trojan wife of Menelaus, inform us of their life after The Iliad (at a time when they were still queens).

The play was written during the Peloponnesian War of 431-404 BCE and notably in the aftermath of the Athenian attack on Melos (416-415 BCE) and the second invasion of Sicily in the spring of the same year.

In its day The Trojan Women was much lauded.  At the Dionysa festival, in which the greatest playwrights sought to entice their 5th century audience with all too familiar tales, Trojan Women won second prize.  Many of its female characters had already lent themselves to eponymous works by Euripides but in Trojan Women Euripides took Hecuba’s story to a new level with incremental accounts of tragedy to be fall the heroine at every turn.

Not surprisingly the play, long perceived as an anti-war text, has generated much interest and seen many adaptions in this and the last century. Trojan Women’s leitmotif is once again significant in the context of the Syrian Civil War, which, at the time of writing, shows no sign of abatement. On the contrary, Russian involvement in the form of aerial bombardment has only encouraged more migration and stepped up a death toll advancing a conservative 450,000 lives.

Throughout an uninterrupted 75 minutes, Zoe Lafferty’s production commands our full attention but not necessarily our composure. We glimpse a minimalist set of three benches which frame the perimeter. The large white screen operates as both a stark backdrop and also a vehicle for surtitles and simultaneous projections of the women’s stories as they appear in black and white and in both side and front profile. Thirteen women appear on stage as the chorus, three of them in red with matching hijabs, two with black burka and others in grey. The opening lines are Euripides – “Troy has been sacked…lift up your heads from the dust” but then the spectacle departs and we are confronted with the visceral.  We should not be mistaken and are cautioned accordingly. The Queens of Syria are not here to entertain us.  They are from the Troy of our age.

Initially the women tell of their life in Syria before the conflict. A different Fatemah begins in English with “Syria is my country and Homs my beautiful city…I could not and will never forget it. In my house everything is beautiful…” Waed, a 27 year old, tells the story of how she went to buy a blue umbrella and Reham, also from Homs, treats us to the wedding preparations of five years ago. Events then take a drastic turn. As protests gain momentum in 2011 Reham is too afraid to hold a gathering.   The women then re-create the wedding scene with a veil and garland which is latter to become the jasmine necklace of martyrs.

In turn the women breathe life to letters addressed to various relatives. For Rasha it is her children, her “jasmine crowns”, whom she hopes to see accomplished and successful. For Mais, from Damascus, her appeal is to her mother whom she cannot visit. And for Sham, a mother of four also from Damascus, we learn that she is both proud to be a Syrian woman and also proud of her children and the fact that she has taught them mercy and tolerance. This, we are told, has not been easy. Tellingly, she asks, “my lovely children, excuse me if I could not provide for you a better life” before asking that they re-build Syria for the better.

Maha recounts giving birth under artillery fire. Raheem tells of her cousin Hossan, a 20 year old taxi driver who was kidnapped. Despite paying a significant ransom he was nevertheless killed and mutilated to such an extent that his father could not identify the body as his son. He died a martyr.

All of the women tell of their flight and that of their relatives, several of whom have sought asylum in other countries and via the perilous Mediterranean with its “boats of death”. Maha left a house over-looking the Asi (Orontes) river and the Al-Rastan Dam. Shams left her pharmacy – her “small kingdom”. Mais left her children’s certificates and awards.

With a call to

“arm ourselves with education, love and forgiveness”

we witness, through a mock-interview, the women’s resentment: their experiences of the ignorant and imperious. Few of us can comprehend the enormity of the challenges to befall them – life in Zaatari, family at best dispersed and a Syrian homeland torn apart.

The question as to what theatre can do, how it influences us, invariably pales in significance with the war. This is

“a huge crime – a crime which made humanity fall”.

We are reminded of both international military intervention and apathy,

“everyone wants to bomb us but nobody wants to take us. Only the sea.”

Certainly on the night that I attended Queens of Syria there were sobs from the audience. Our sympathies are but small-change. We can remember the lessons of Troy. And we can show our solidarity with refugees with the campaign to wear safety pins. But perhaps more significantly we can engage further with Refugee Productions, Developing Artists and Tell Brak films (which produced an award-winning documentary of the Amman production in 2014) to assist other beyond the horizon.