Walls of Freedom: Street Art of the Egyptian Revolution is a powerful tribute to the artists who shared the stories of suffering, resistance and courage in the face of a desired but truly unknown destiny as the revolution unfolded and continues to unfold in Egypt.

Basma Hamdy, an Egyptian artist, designer and graduate of the Maryland Institute College of Art, and Don Karl, an art book publisher and cultural activist and graffiti artist himself, have brought together more than 30 artists, 50 photographers and dozens of historians and activists to document and preserve the ephemeral nature of graffiti art in the Egyptian revolution. Asking Karl what has surprised him most in producing this book, he writes via email,

“The responsibility coming with the project and the amount of work necessary.

We have a slogan for our graffiti  books “know your history”, so we take great care with what information we do transport, knowing that we contribute to art historical records. But mixing up a name here and there or a date in a graffiti book is not the same as when you are trying to convey a record for the revolution in Egypt.

So many people died and so many people sacrificed so much. For many, normal life and job ceased to exist now for more than 2  ½ years.

So we want to stay true to that and to our friends who are putting so much trust in us. Of course we know that we will only have some stories of a Revolution and not THE story of the Revolution. But still we want to try our very best.

So this and the fact that the revolution has not ended, and the great artworks created in the streets along with it keep increasing every week has made this the most difficult project in my life.

And I did publish my first book 27 years ago, so I usually know exactly what to expect.  We were about to finish the book last December, and then suddenly Millions were in the streets again and our friends were painting the Presidential Palace walls.

This is when we realized we need financial help to get this book together.”

To complete the book, Karl tapped into crowdsource funding efforts through Indiegogo. Advanced sales of the book and complimenting material are rapidly selling, surpassing initial goals. All extra funds received will be directed to support local street arts projects and artists in Egypt.

It isn’t as though Egypt is indifferent to the timeless form of human storytelling through graffiti. Scholars are currently researching graffiti on the temple walls in Luxor, Karnak and Medinet Habu. In more rural areas of the country, families add their own contemporary stories of their Haj by way of boat or a plane to the entrance to their home. Yet, in a nation without billboards or major advertising campaigns with fashion models or high tech gadgets, graffiti on a relatively blank street canvas becomes even more powerful.

“I don’t like this focus on Islamic Art when talking about Arabic Graffiti or Calligraphy. It is of course a very important part of it also in the development of Arabic Calligraphy, but there are many other aspects as well, that have nothing to do with religion. The links from contemporary Egyptian graffiti, to Egyptian identity and ancient traditions are of course obvious. Many artists have picked them up, be it links to Islamic Art, Sufi traditions, Coptic Christian paintings or Pharaonic symbolism, Some use paint that they themselves produce from colored stones like thousands of years ago, some use forgotten techniques and styles of mural painting.”

This Egyptian graffiti began to emerge in a modern culture, with its own style, voice and urgency. Invoking the Pharaonic ancient Egyptian Ramose after soccer (football) fans were killed. Alerting people to the use of tear gas. Reminding people of the deadly actions taken by the state. Then, the tragic humor – a smiley face juxtapose a gathering of tank officers or a machine gun instead of shooting bullets is shooting out white doves. One illustration in Arabic quotes a verse from the Quran says,

The artists contributed to challenging society out of a sleepy haze and into a future of self-determination that knows no script.

For the first time, cell phone technology and social media via Twitter, Facebook, YouTube cracked open the walls of traditional information gate-keepers – the government, diplomats, international media, official government media outlets and channels. In fact, describing the censorship and the level of freedom of the press and expression, Karl explains,

“The only censorship in Graffiti should be yourself, of course it does not always work like that. In Egypt Graffiti sometimes replaced the traditional media, telling truth that you could not see on TV or read in the papers. That is still the case in many instances now. Media bias is not gone at all. That was what makes Graffiti in Egypt so important, as a tool to tell the story and commemorate it.  It is of course also a tool of propaganda.”

The value of the street graffiti multiplied exponentially as images circulated to inspire and motivate others to join forces. PDF stencils of graffiti circulated via social media. Even the pressure of turning off the internet and cell phone service for days did not quell the inevitable tide of change. People expressed and communicated the revolution in moving detail and images to the world. And, the world responded.

“Some online groups and events like the MadGraffiti Weeks have only been possible because of social media. When the people in Egypt saw the pictures that Egyptians in Berlin painted  in the fight against SCASF it had a greater impact than maybe the graffitis in the street itself. So international networking, mobilizing and of course documenting has been facilitated and sometimes enabled by social media.”

The date January 25 will always hold the memory of millions of Egyptians who changed the course of their destiny.

Art reflects the health of society. One doesn’t need to attend a debate between Aristotle and Plato to know that if art is silenced, society suffocates and perishes. For only with art, can society advance and thrive. Nothing is more poignant though than to observe the emergence of art in spite of and in fact, boldly defying social or political oppression.

Walls of Freedom: Street Art of the Egyptian Revolution bears witness to the sacrifices, suffering and hope of a new generation of Egyptians.

Advanced sales of the book and other supporting material can be purchased through the crowdsource funding site of Indiegogo or www.Indiegogo.com.

Peace Sign Boy, Art in background by Hosny, Photo by Mosa’ab El Shamy (used with permission) A street kid gives the peace sign, homeless street kids were a major part of the revolution, many were injured and arrested. 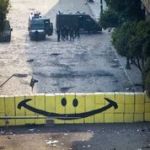 Barrier Wall (Used with permission, Artist: Zeft, Photographer: Amru Salahuddien2) A barrier wall is painted with a smiley face, while the military tanks and officers are seen beyond it. Nov. 2012 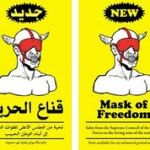 One thought on “Walls of Freedom: Egyptian Graffiti Artists, the New Revolutionaries”