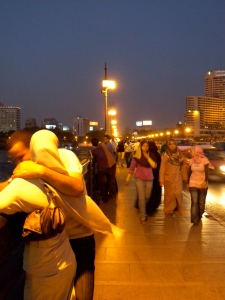 Before traveling to Cairo, the travel tips I received included:

Well, this was a disaster even before leaving because I had none of the above.  Thankfully, a dear friend who used to live in Cairo emptied her wardrobe for me.  Among beautiful trendy long sleeve shirts and t-shirts, she revealed the secret – scarves.

She handed me scarves in beautiful blues, reds and even ones with threads of gold running through.  Those plus my old faithful pink pashmina, I knew I was prepared to travel to Egypt.

Upon arriving in Cairo, immediately the scarf made sense.  The scarf protects you from the elements especially the sun, heat and the ever-present sacred sand.  Yet, there is also a religious element to the scarf.

Before I entered the Mohamed Ali Mosque in the Citadel, I was introduced to the proper way to wear a scarf.  After a few folds of the pashmina around my face, a young woman pinned the scarf to my head tight and secure with no hair showing.  At first it was uncomfortable, I realized I was wearing cashmere on my head on a day over 100 degrees.  Gradually, I forgot my new headpiece and walked through the luxurious mosque.

It wasn’t until I entered the courtyard of the next mosque did I remember my pink wrapped head.  A man came up to me to explain the origin of some of the courtyard columns.  He pointed to each pillar explaining, “this one is Roman … this one Phoenician … this one Coptic …or this one is from Aswan and this roof is Indian carved wood.”  I thought to myself perhaps this is a sign of  religious tolerance to have symbols of other faiths and cultures in the mosque.  Sadly, the collection of columns represented early recycling.  After my brief history lesson, the man asked if I was Muslim.  I was rather surprised because no one had ever asked me this before.  I then remembered my pink head.  I said, “no” to his surprise.

Practicality vs. Faith became the question in my head about the Scarf.  Looking around the campus of Cairo University the young students displayed a multitude of pastel covered heads.  The colors reminded me of an Easter egg basket.  Walking along the bridge at night, women wore glitzy scarves with sequins, rhinestones or possibly gems.  Sitting in the gardens of the Marriott wealthy women would be fully wrapped in Burberry plaid trimmed scarves and burkas.  Walking in the downtown area of Cairo, women would have a full wrap with sequin beading at the small of their backs.  The wrap and scarf became a statement in faith and fashion.

Then it hit me.  In Egypt there were no billboards of anorexic models pushing designer wear or cosmetics.  There were no suggestive ads selling sex for a shoe company.  There were no ad campaigns with underage models selling anything.  So, women were healthy and shaped like women.

However, in the news recently, French President Nicholas Sarkozy condemned the use of the burka and wants to remove the burka or hijab from France.  When social customs advance to the presidential level, it is critical to listen to the statement being made by the community at large.  What is the statement the French Muslim women are making and why?  How ironic this public debate is happening in the epicenter of the fashion industry.  Beware that by demanding the scarf be removed doesn’t remove the statement.

Wearing the hijab can be liberating as well as imprisoning.  Peer pressure of any sort is part of human nature and society.  Since I completely forgot what I had on my head when I was wearing a hijab, I realized that wearing the scarf (for me) was really a statement for others.  The statement could be modesty, rebellion from fashion trends or simply rescue from the elements.  As a Western non-Muslim woman in Egypt, my statement was respect.  In return, I received it.