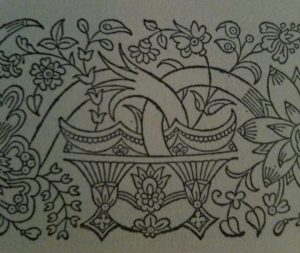 What do old tales tells us? We live, we die and the creative spirit within blossoms and sparks the legacy of our life.

Artin K. Shalian captures the spirit of the writer, the storyteller with ancient Armenian tales preserved with great love. Around our kitchen table growing up, I heard the legends of his craft; his love and support for other authors, including Khalil Gibran; and, his devotion to his wife, Baidzar Shalian.

From the passage entitled “On the Wings of Night” in Pagan Idylls:

Although she was a maiden of the heavens, she still possessed many a caprice of love that could not be satiated in her ethereal state of existence. According to the ordinance of the Great Master, love in its realization would consummate in creativity, and creativity would necessitate eventual disintegrations – death. In the universe no act should tend toward disrupting the eternal balance, the eternal harmony within the the elemental factors of Life. And in accord with this precept, she could satisfy the whims of love only by assuming the physical mould and losing all her unearthly characteristics, above all, her immortality, for she knew that love would consummate in death. But what would it matter to face death after experiencing the most enthralling sensation of love, the creative love of the human being! Many a nymph indeed had craved this ecstasy, yet no one but Eve had ben bold and daring enough to challenge the laws of the Master Creator and face the consequence – mortality.

Shalian, was an Armenian scholar and author of multiple books exploring and presenting the themes of Armenian folklore. In Pagan Idllys, he introduces this volume with,

“The legends in this volume do not represent literal transcriptions of Armenian folklore, nor do they suggest any similarity to nursery or fairy tales. In story form they offer an earnest attempt toward the exposition of certain universal truths, certain traits in human character as dominant, controlling factors in life.

The basic thoughts underlying these legends have been brought out through the analysis of original folktales or popular sayings gleaned from scanty collections of ancient Armenian lore, and presented through fictional characterizations and development.”

I love dusting off old books to hear them speak. As though the ancients are always present, sharing, guiding and beguiling.