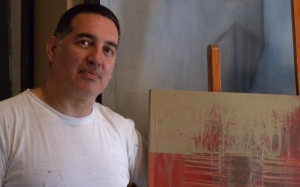 Felix Toranzos is the king of Paraguay, the king of contemporary art in Paraguay. He is the rare artist who lives well and freely from his art. The envy of many, to be certain.

His magic is himself, his passion, his feelings. With an empty canvas, he pours himself into the painting until he is empty. A moment of ecstasy, he says. He is done when he is done. Often a creation is sold before it is even dry causing a heart ache as though a child is taken before its time. Melancholy opens the space for more creations, more pieces of him to share with the world. Each painting is a piece of him, which generates even more success. As each collector, buyer, friend literally wants a piece of this spirit of Toranzos, hoping his success, his passion is contagious.

Influenced by his studies of architecture and the Renaissance masters, each painting, each creation is a moment of time both with a past and a future. The colors mimic a soft creamed gold texturized church walls with a etching of Saint Asuncion Madonna with her crown. The tension between the tradition of Roman Catholicism well established in Paraguay and the desire for a free open sky. Or the earth red texturized canvas leaving open space to contemplate, imagine with lines to follow with a choice of direction either in a straight line or in a semi-circle. Numbers, symbols etched into the paint reveal a simple moment of thought.

His gallery is his home filled with paintings both his own and by those he admires. Cherubs in black clay sing or have their hands in prayer. Stone sculptures and vessels rest in corners – stone dogs that may have adorned a 19th century grave protecting their master or a child resting on the lip of a stone water fountain. Walking to his atelier, more architectural ornamental pieces line the walkway from old doors to windows. His atelier is tight in space yet overflowing with objects for inspiration and enough space to rest a large canvas on a high table to just paint.

Each year he contemplates a theme and then mixes it up with past themes. His latest theme is to incorporate digital photography into his paintings. In 2012, his theme was flowers in pen and ink with a watercolor wash. Eventually he expects he will do a series on the 19th century architectural pieces he has been collecting to honor them and the time period.

Toranzos’ presence is golden, self-assured, confident, emotional and authentic. A genuine artist. Toranzos is a true master who belongs in the club of art masters. Toranzos, in a well worn t-shirt and grey paint splattered sweat pants, which looks like a natural deKoonig, is at home with his three dogs and at home with galleries owners coming to him to purchase his art. Though he has never officially exhibited outside of Paraguay, his art is collected and presented around the world.

With the confidence of a successful artist who has been supporting his family for the last 30 years, Toranzos responds to the question, why not exhibit outside of Paraguay with, “I am the king here. I don’t need to do an exhibit outside. I am the king here.” And, with a slight dip in his voice and a sparkle in his eye, he says, “and you know that.”

Toranzos at home in his gallery.
Photo by Keri Douglas

4 thoughts on “Hidden Secrets of Paraguay: The King of Art, Felix Toranzos”