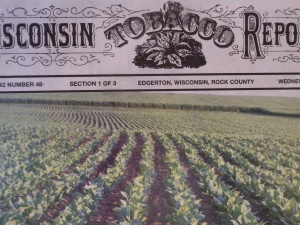 Diane Everson, publisher of The Edgerton Reporter newspaper in Edgerton, Wisconsin runs her business skillfully and with sound family advice. Her family purchased the paper in 1951 and her father never budged from his mantra of “Do what you do best.” Today, an anomaly in the newspaper business, The Edgerton Reporter, founded in 1874, is strong, healthy, debt free and not available on-line.

When asked with astonishment about not being on-line, Diane said, “Yes, because it has never been clear as to why provide something for free.” The Edgerton Reporter has remained dedicated to delivering the best information to its 3,000 readers who live and work in the area. With two full-time reporters and a focus on its business plan – it has remained debt free.

The July 16th issue of The Edgerton Reporter features the 38th Annual Tobacco Heritage Days on the front page. At one time Edgerton was the tobacco capital of the world. The once a year edition is filled with stories on tobacco and local lore. One article is on who will lead the Sunday parade. Another piece is a profile on the tobacco farmers of today and their new crops as the demand for tobacco declines. Then there is the discovery a bundle of newspapers almost 100 years old revealing commercial real estate sale prices and the spread of typhoid through contaminated river water. This article even acknowledges the research of an eighth grader who was shadowing the reporter for a day. There is even a story written by a World War II pilot on his daring dive-bombing missions in Europe.

The advertisements are the who’s who in business in Edgerton – from clothing to real estate to the local medical clinic to agricultural suppliers. Business owners are displaying their advertisements proudly in the paper.

What makes this even more curious is the fact that the crop being celebrated is tobacco. After years of anti-smoking efforts – tobacco is the most friendless crop in agriculture. But in Edgerton not only is it celebrated on the front page – the paper is supported by the local medical clinic with a congratulatory message.

The newspaper business edge in general has been lost to filling space or feeding a 24-hour news cycle with endless repetitive non-stories. Perhaps this is the elephant in the room in reformulating the financial structure of the newspaper business. One size doesn’t fit all. The secret may be providing well-written, factual, local or expert stories, which engage the entire community from an eighth grader to the retired Air Force fighter pilot. The Edgerton Reporter by focusing on local quality not quantity contributes to its success.

A well-written paper is a joy to read and well worth the $1.00 a week. The Edgerton Reporter is a tribute to Diane Everson staying true to good local journalism and following the mantra of her father “Do what you do best.”

MORE PERSPECTIVES ON THE NEWS BUSINESS:

Another perspective on the newspaper industry – the price of the paper – from the News Futurist – the cost of the paper.

Being a giant or being a nimble and quick business is the question. Why the news publishing industry is where it is today and their on-line presence. From Poynter Online – Amy Gahran.

TechCrunch chimes in on the structure of the news business. Being nimble is critical to success just as equally to have the best journalists covering hard news.

Earlier this year on the Daily Beast Larry Kramer had the vision. Create issue oriented news bureaus making available their content in the format requested by a news organization. The format could be for the web, portable phone devices, print, radio and/or TV. But, the key is that the information is first created by experts and then formated accordingly.  Kramer has identified the most reasonable strategy for the future of the news business.  Again, as Diane Everson says, “Do what you do best.”