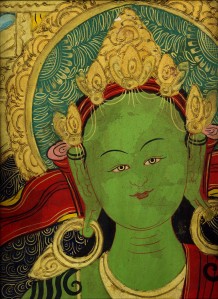 Ani Choying Dolma’s songs are ethereal and meditative in a language I do not know.  In the quest to discover the meaning of her words several years ago, I found a treasure to last a lifetime.   As we enter 2010, it is time to share this story.

Coming from a very traditional society, Ani Choying Dolma considers herself to be broad minded and thrives in the modern world- even though she is a very traditional Buddhist nun.  Taught by taxi cab drivers, Ani Choying Dolma is the first nun to drive a car in Nepal.  She is also the first nun to create a CD in Nepal.  Her songs are blessings, which we should all be so fortunate to hear.  Her perspective on life is enough to create a pause to question the direction of your own pursuits.

Ani Choying Dolma’s family was originally from Tibet a long time ago.  She was born and raised in Nepal with two younger brothers and an older half-brother and an older half-sister.  By the age of ten, she knew wanted to join the nunnery to avoid a possibly abusive marriage (an all to common reality for women).  Her experience showed that the only choice girls have in society is to either marry and certainly be abused or join the nunnery.  The choice was rather obvious.

Ironically, the men in her life gave her the worst and then the best impressions or examples of mentorship in her life.  Men in her family left the worst impression.  However, it was her teacher when she entered the nunnery – who was the best – as he encouraged her to use her gift of song.  He encouraged her to dedicate her voice to the ritual ceremonies, which include mantras or prayers sung or chanted.  Ani Choying Dolma explained mantras are a “meditation technique uniting the mind with the sound.”

Officially launching her musical career (alongside her spiritual journey),  Ani Choying Dolma thanks Steve Tibbits for hearing her sing and then making an album with her. With her first recording in 1996,  Ani Choying Dolma has just released  her 8th album Matakala in the Newari language in November 2009.  She regularly does concert tours through Europe and Asia.  Through the proceeds of her concerts and CDs, she created the Nuns’ Welfare Foundation, which helps educate young girls in Nepal.  She also has a special place in her heart for the street dogs in Nepal so she sponsors Street Dog Care Camp, which provides street dogs with veterinary care and adoption.

Ani Choying Dolma’s songs are blessings – traditional mantras or contemporary lyrics.  Her perspective on life is enough to create a pause for anyone to question the direction of their personal pursuits.

She shares the words of one song,

In the eyes of flowers the world appears as flowers

In the eyes of thorns the world appears as thorns

Talking about perception – how everything depends on how we perceive things

May my heart always be pure.

May my words always be enlightened.

May the sole of my feet never kill an insect.

In the beautiful eyes the world appears as beautiful.

When asked who inspires her, she immediately responds, “Mother Theresa because she is a nun.  Regardless of our differences in religion, fundamentally, we believe in the same thing:  kindness and compassion.”

East meets West as Ani Choying Dolma explains her views on the West, “everyone knows what the problems are … ”  as though speaking the obvious.  Inquiring further, she responds that in the West people live only with their brain as shown by the drive for intellectual and financial successes.  However, not that in Nepal everything is perfect, she said at least they live more with heart shown by compassion and hope.  Nepal is one of the few (if only) countries that does not identify the Gross National Product financial data but releases the Gross National Happiness number. Success is in combining the intellectual qualities of the brain and the compassionate qualities of the heart equally.  In her view, Ani Choying Dolma thought that in the West there is too much pressure to develop intellectually, increase the capacity of the brain and “forgetting ignoring the spiritual quality.”  By developing the heart qualities, a person becomes “more helpful, more wise, meaningful.”  She said, “Both sides are important.”

Ani Choying Dolma offers the sensitivity and wisdom to consider everyday.  She reminds that  “Everyone wants to be happy … even the animals wish to be comfortable.”

One thought on “Smile, Wishes for Happiness to You”